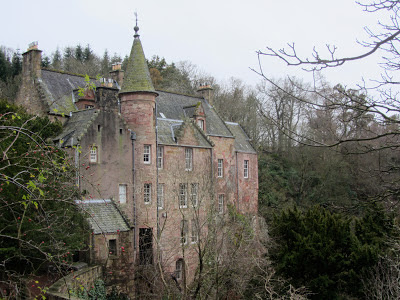 Happy New Year! It's been a while since I caught up with these pages, mainly because, as I said in my last post, I was on retreat at Hawthornden Castle from mid-November until just before Christmas.
For those of you who don't know Hawthornden, it's just south of Edinburgh and was set up by Drue Heinz. Each year they take applications from writers to go there for four weeks and work on a project. They take up to six writers at any one time (there were five, including myself, when I was there.)
All domestic needs are taken care of and the writers are free to sit at their desks and write all day. This is assisted by a rule of silence from 9.30am to 6.30pm, which sounds very fierce but actually amounts to nothing more than courtesty towards your fellow writers. We emerged like creatures coming out of caves for pre-dinner sherry, if we wanted it, at 6.30pm, and eagerly discussed our progress and congratulated and commisserated with each other.
I was the only person writing solely poetry, my companions being primarily fiction writers, and given how different it was from my normal routine, I was worried about whether I would actually be able to deliver the goods day after day for a whole month. Actually it was a remarkable experience- I wrote at least one new poem every day I was there, and spent quite a bit of time revising earlier work and working towards a draft manuscript. I came out of it with 22 new poems and the bones of a new collection. Of course they're not all absolutely finished, and one or two won't make the final sift, but it's still the equivalent of two years' writing for me! I'm looking forward to editing them over the first few months of the year, and hope to have news of the new book before too long. 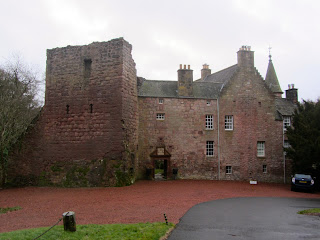 The opportunity to focus solely on writing is obviously a real boon, but my companions were, I think, instrumental in how much I wrote. It was such a dedicated bunch of people that, if I felt myself flagging, the fact that they were working away within metres of me helped me find that burst of energy: I didn't want to let the side down! Writing was also, if not the only topic of conversation, a major one, and our chats around the breakfast and dinner tables were hugely stimulating and inspirational. Respecting their privacy I won't name them all here but the lovely Vanessa Gebbie, to whom I'm grateful for these photos, has already blogged about her experience there. Suffice it to say that, as well as a huge amount of work, I came home with four new friends who all feel like family members!

The next big thing as far as my own work is concerned is a group of Poetry Live readings in Feb/March. These are remarkable events for schools, at beautiful venues which each hold around 1000 people. They have a fantastic bill of poets.It's the first experience of a poetry reading for many of those in the audience, and many of the younger poets it's my privilege to know date their passion for poetry from when they first went to a Poetry Live event, so it's a very humbling experience in some ways.  For details look at the Readings page, but if you're studying any of my poems at GCSE and you're coming to an event, do come and say hello, or drop me an e-mail.

All for now but more next month.