Time has flown over the last few months so I wanted to give you a quick update on what I've been up to. 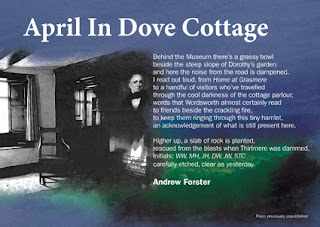 My poem is part of an occasional series of poems that is emerging about living and working in the shadow of Wordsworth. It's actually the second half of a longer poem that will probably be in my next book.

Each of the poets have been engaged in a series of events in librarys. For details of mine see the Readings page.

I recently had the pleasure of taking part in the Festival of the Mind in Sheffield. At the Festival Smith Doorstop launched The Sheffield Anthology: Poems from the City Imagined, edited by Ann and Peter Sansom. I was especially pleased to be included in this since I think of Sheffield as my home city, though I haven't lived there in nearly thirty years. This event was my first experience of going there as a poet. The anthology features three poems of mine, two of which are new, and one of which is featured as this month's poem.

I also took delivery of the fabulous new anthology of eco-poetry from Two Ravens Press Entanglements, which features another new poem of mine The Duddon Valley.

Next month I'm off on retreat to Hawthornden Castle for a month. My writing takes place in the nooks and crannies of the day, around a more than full-time job, so a month's writing time seems both wildly exciting and utterly terrifying. I'll let you know how I get on when I return!

'Wildly exciting and utterly terrifying' - a brilliant combination: it couldn't get any better! Have a wonderful time.
Best wishes
Po (Pauline Yarwood)