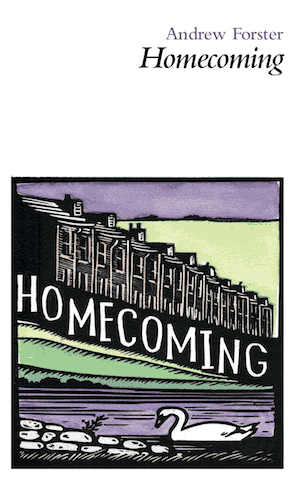 Once again it's been a while since I updated this blog but I can finally announce the imminent publication of my new collection of poems Homecoming from Smith Doorstop. This is due out on Oct 1st and I'm going to be reading from it at various places up and down the country over the next few months so do come along and say hello if you can.

I've talked a little bit about this new book in various places over the last year or so. My second book Territory explored the idea of what it means to make a home in a particular place. Much of it was set in the village of Leadhills in the Southern Uplands of Scotland, where I was then living. To some extent Homecoming picks up where that one left off, In 2008 I left Scotland after 21 years and moved back to the North of England, to Cumbria. The poems I wrote then were essentially Cumbrian poems, exploring the history, natural history, and my day to day life in Cumbria in a similar way to how I treated Leadhills in the earlier book. As time went on though I began to reconnect with South Yorkshire, where I grew up, and the book as a whole became about homecoming in a wider sense.

The cover image is once again by my good friend Hugh Bryden, and represents the two parts of the North of England featured in the book.

Other dimensions were added too. As regular readers of this blog will know I work for the Wordsworth Trust in Grasmere, on a site that includes Dove Cottage, so the lanes that Wordsworth walked are my 'office corridors'. When I first started working at the Trust I was asked how I could write poetry about the Lake District given so much had been written before. I think my answer is that my poems arise from my personal experience of it. I have tried to write a 'modern Lake District poetry'. I live and work in a rural area but I go to work in an office. I see the things that the Lake Poets saw but I see them when I'm driving past to get to work, or to go to a meeting. I walk the hills but mainly at weekends or on public holidays, when I'm already thinking about what I need to do when I return to work. We can still occasionally manage to touch the sublime, though, despite the pressure of modern life, and that's one of the things my poems are trying to do.

I haven't ignored Wordsworth. He is an inescapable presence in some of the poems, haunting the book in the way he haunts the Lake District.

The book should be available at Inpress, Amazon and the Poetry Business website very soon. You can e-mail me, details on the Contacts page, if you'd like a signed one.

The title poem is the new  'Poem of the Month' on this blog. I hope you enjoy it.

I look forward to hearing what you all think of the book.